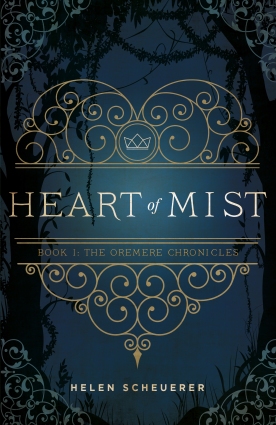 Title: Heart of Mist
Author: Helen Scheuerer
Publisher Info / Release: Talem Press / August 31, 2017
Source: E-ARC from the Author
Rating: 4 / 5 *’s
Synopsis:
In a realm where toxic mist sweeps the lands and magic is forbidden, all Bleak wants is a cure for her power.

Still grieving the death of her guardian and dangerously self-medicating with alcohol, Bleak is snatched from her home by the Commander of the King’s Army, and summoned to the capital.

But the king isn’t the only one interested in Bleak’s powers.

The leader of an infamous society of warriors, the Valia Kindred, lays claim to her as well, and Bleak finds herself in the middle of a much bigger battle than she anticipated.

Heart of Mist is the gripping first book in The Oremere Chronicles, a fantasy series of epic proportions.

I received this book from the author for free in exchange for an honest review!

I was pleasantly surprised how different this book ended up being from my initial look at the synopsis. Don’t get me wrong, I was pulled in from the beginning but I’ll explain it more as I go along. Anyways, I really enjoyed this book and I’m already anxiously awaiting to have book two in the series…and a physical copy in my hands!

To explain my surprise – a lot of YA fantasy lately (to me and this my opinion) has always had some sort of love interest or a little romance. Not every book but a decent chunk of them. Now, in Heart of Mist, it hinted at bits and pieces of romance but there’s no definite road that I felt was shown. This book was refreshing in it felt like it was more adventurous and stuck to the plot line to get to the overall point of the story. But don’t worry! There’s a few scandalous peeks into the characters pasts to quench that particular thirst and make your jaw drop. And you could totally ship certain characters if you really want to!

Which brings us to our characters! All of them are imperfect and flawed, which is a little different but something that I can really appreciate. You know this from the beginning with the main heroine, Bleak, and there aren’t a whole lot of illusions to make you think otherwise – if that makes sense. So here are the main characters brief breakdowns: (I’m going to do the main four for me. There are some side characters but these are the ones that I think have the most story to tell further into the series).

The world that’s created is diverse and beautiful. Helen does a wonderful job of describing all of the landscapes as if you’re truly seeing it from Bleak’s eyes. Each continent is different and adds a different flare as they travel through. And the book map is absolutely gorgeous! I think that all the different views we see in the story will come together in the next book and reveal more of what is going to happen. It’s a great first book in setting the characters and the plot up. The writing is amazing and it didn’t feel like it had choppy sentences or that things didn’t flow. There were times when I was confused as to why we switched to a different character but at the end, it came together and you realize why you needed to see that part of the story from their eyes.

If you like Wonder Woman and The Queen of the Tearling series, you’ll really enjoy this book. Those were the vibes that I got off of it and I am so glad that I was able to read this. I hope this will get the recognition it deserves in the US because I can only imagine how many readers would love this story.

I’m so ready for the second book! The ending made my jaw drop. It’s not a terrible cliffhanger but it’s enough to make you anxious to know what happens.

Stay tuned for a Q&A with the author, Helen Scheuerer, soon!

(UPDATE):
Where to buy Heart of Mist: